Breaking
Hiring Process ready for Gen Z as well as Millennials Everything You Need to Know About Paying Tax On Rental Income What Are the 8 Stages of Web Design What is the best SUV to lease? Why Presentation Skills are More Important in a Virtual World

Whether you like it or not, your workplace is the place where you’ll end up spending a fair chunk of your time on a daily basis.

This simple but quite important revelation puts one in just the proper mindset for them to start thinking about improving the quality of their stay at the office. Office culture is rather important when you think about it, as without certain conditions, your otherwise lively and active collective can become dull, disinterested, and succumb to the overwhelming force of cubicle-bound tedium.

Well, it is your job, as the person in charge, to make sure the people around you are happy, and God darn it – you’re going to make them look happy even if it means shooting at their feet in order to dance. (There’s also that lipstick thingy, which when you put it on –makes you smile. It’s a Honey Boo Boo beauty pageant type of cringe-fest. Eastern European pro folk dancers do it, too, for some reason.)

Now, while wielding a gun in the middle of an office does seem like a fun prospect, there are more subtle ways of improving the overall atmosphere and appeal of your workplace that doesn’t include as much violence! (Also, you won’t have to deal with pesky health ‘n’ safety inspections later on.)

In this article, we’ll propose to you how to improve your workplace efficiency and overall happiness levels in 4 simple steps.

Without further ado, here’s how to do it. 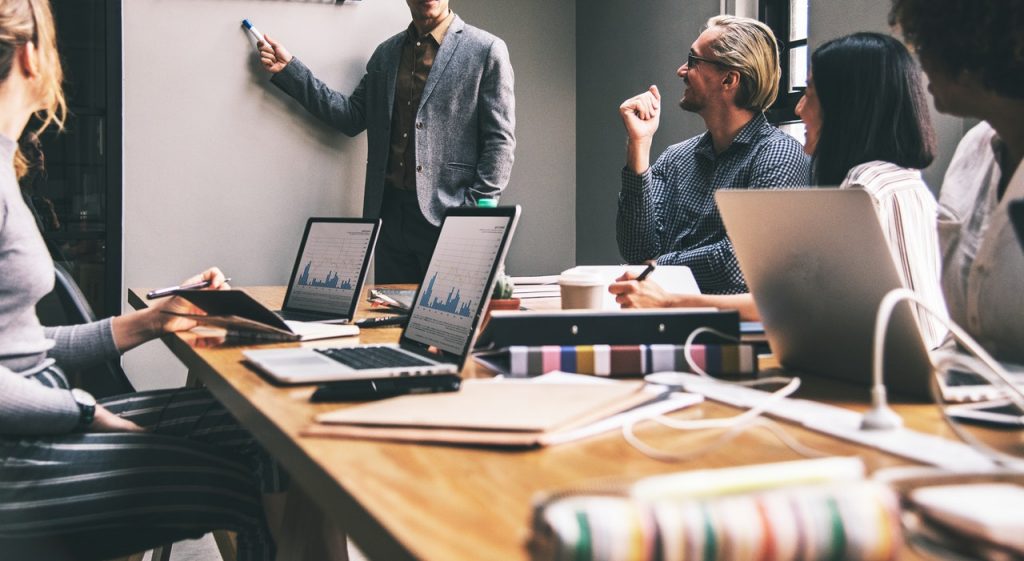 One of the problems with regular scheduling is that it concentrates solely on what needs to be done and sort of sees people as robots rather than living beings with coffee break needs and other various needs, to put it that way.

…. Aaand it should probably stay that way, in all fairness. (Especially if you’re dealing with millennials.) Remember, Stalin did make the Russians overworked and forced them to reset factories thousands of miles away on short notice – but he did win the war.

Anyway, a little bit of flexibility won’t hurt your productivity, really. When making your new schedule, make sure to incorporate physical activity for your workers (quite important for desk jobs), some room for coffee and meal breaks, and even your moodiest employees will brighten up, you’ll see!

Other than not really being interested in being treated like robots and overworked, virtually all of your employees will display some other needs, as well.

Take coffee breaks, for example. That little slot of time that comes before the coffee break and the one after it will make your employee a radioactive ant of sheer productivity and labor! Just think about it. A coffee break is from ten to ten-fifteen, so your average coffee-chuggin’ employee will start getting giddy at about fifteen to ten, enjoy his or her favorite beverage during the designated period, and then feel like a million bucks for another hour or so!

That’s practically two hours and 35 minutes of increased productivity! That’s like three and a ha… wait, ten minus fifteen and then… to the power of 2…

Oh, heck, it’s at least like an hour and a half of decent work thanks only to coffee. Grand, innit?

Don’t forget to make the coffee-drinking facilities safe and clean: having a fire duct will get rid of the smell and smoke of burnt coffee, cleaning the filters will make sure everyone is safe, and having a fire extinguisher on standby just in case means the worst can be averted if someone leaves the stove on.

3) Get Some Greenery Onboard

Do you know why people like long walks in the park?

It’s because all of the greenery around you is so relaxing, the birds are chirping and you can become one with nature. Well, this would be the same reason this particular recipe works so well for offices, too.

If your workers are getting kind of moody, yawn all the time, and are kind of disinterested, simply popping a couple of house plants, or in this case – office plants, can do wonders to increase the overall mood of the entire workplace! Just place them close to a window (if they’re smaller), water them every now and again, and they should be A-ok.

Believe it or not, animals tend to do quite well in different work environments.

From famous cats onboard ships that sailed across the world, to other, brewery cats that have helped keep the rats away from barley and rye, and then who can forget the faithful shepherd dogs who can direct hundreds of sheep into a single gate!

Now, it’s a tough chance a pet will actually be of much help in a digitalized office with plenty of computers, but they can, nevertheless, help boost the morale of your workers.

All in all, making humans happy is not that difficult. Get them a vending machine full of refreshments, throw in a cat to stroll about lazily, and position some plants to sit all pretty in the hallway and that’s it! Your workers will know how to appreciate it and the productivity will rise sky-high, forsooth!

How to Prepare Your Store for Millennials

The Key to Success: Why You Need a Business Plan and How to Write It

Getting the best out of your workforce is not just about paying them well and making sure they know they are valued. It’s also about giving them a place to work where they will feel comfortable, and be able to work efficiently and easily. A friendly and welcoming office space is also important for when […]

When you want to make the most of your income and make your money work for you, you need to get on top of your personal finances. However, this is easier said than done, and we all know a couple of those annoying people who always seem to be able to save thousands every year. […]

Hiring Process ready for Gen Z as well as Millennials

Everything You Need to Know About Paying Tax On Rental Income

What Are the 8 Stages of Web Design